Overmolded discs are created in a two step process. Typically, the flight plate and part of the rim are created first with one type of plastic. The outside of the rim is added during a second step, with potentially a different plastic. There are a few potential reasons why a manufacturer would want to take on the complexity of the overmolding process. Checkout the picture of the Innova Nova below. Overmolded discs are different. In a competitive disc market, the look of an overmolded disc can set it apart from the rest. Another reason is aesthetics. Some customers prefer the look of overmolded discs. Beyond those two marketing reasons, overmolded discs may allow for improved performance on the course. The overmold on the outside of the rim can be made of a more durable plastic while the inside is made from a plastic with a better grip. This configuration keeps the rim intact even after serious tree hits while still providing a good fingertip feel.


The Disc Lab does not have any data on the reasons for overmolding discussed above. The subject of this post and the final reason manufacturers may want to overmold is to improve the gyroscopic stability of the disc. Manufacturers often claim that using higher density plastic in the outside of the rim improves the stability of the disc. Let's put that claim to the test using The Disc Lab simulations. 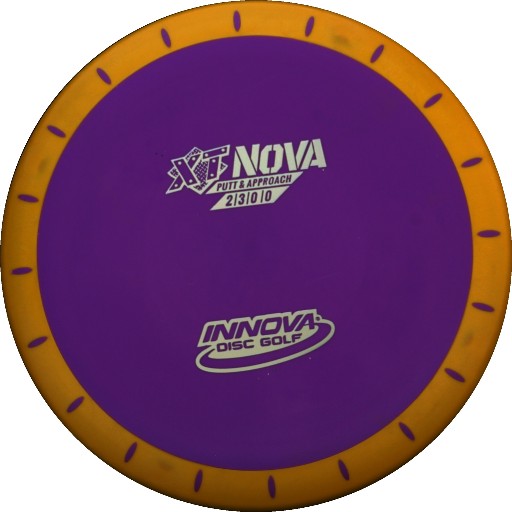 Yulian Kuncheff has a very interesting post about his work dissecting discs and measuring their masses. While some of his methods are admittedly approximations, the main result is that an overmolded MVP Photon has 6g (out of 175g) more mass in the rim compared to a very similar Innova Wraith. The 6g represents about 4.5% of the mass in the rim of the Photon.


For the purpose of investigating the effect of the moment of inertia, let's consider two discs that are identical in all ways but with different moments of inertia. Of the two discs, the overmolded one has a higher moment of inertia compared to the single mold disc. We'll be simulating these two discs because there aren't two real-life discs that meet this criteria.

The two possibilities discussed above are simulated using the aerodynamic characteristics for a typical distance driver, the Innova Destroyer. The overmolded disc is assumed to increase the moment of inertia by 25% which is an intentional overestimation. Yulian's data showed that effect of overmolding on the mass in the rim was much less than 25%. For the first simulation case where the overmold and single mold discs are thrown with equal angular momentum, the flight paths come out to be nearly identical. This is somewhat expected as two discs that have the same angular momentum will rotate the same (turn and fade) when the aerodynamic forces are also the same.


The second case is for two discs thrown with the same spin rate. The overmolded disc with 25% more moment of inertia now has 25% more angular momentum. Plots for the two throws are shown below. The higher angular momentum of the overmold disc keeps it straighter and flatter compared to the single mold disc. The flatter flight also keep the overmold disc in the air longer which allows it to fly farther. However, the difference between the two throws is minor. The overmold disc flies only five feet further than the single mold disc.