There's something amazing about throwing a disc as hard as you can and watching it sail off into the distance. Throwing long is even better when the disc goes where you want. How to add distance is one of the most common questions from beginners looking to improve their game and impress their friends. Of course adding distance can also help lower scores if some greens are currently out of reach for you. Let's dig into all things distance drives.

There are many factors that go into lengthening your drives. Form is incredibly important, but isn't something we'll cover in this post. We'll start with the basics, throwing the disc faster.


Let's look at the Innova Destroyer and the Innova Tern. Both are distance drivers with similar speed. However, they have significantly different stabilities. The Destroyer is stable to overstable while the Tern is understable. All plots in this post will use these two discs, but the general conclusions apply to other discs as well.


Our analysis starts by picking a given initial disc speed. With the given disc speed, the hyzer and pitch angles are optimized to produce the maximum straight line distance to the location where the disc hits flat ground. This process is repeated for a variety of initial speeds and plotted below. All discs are max weight while wind and elevation are not factors.


The distance results are nearly identical for the two discs. Both lines curve upward at lower speeds and the straighten out above 40mph. This transition in the data is due to the the discs not generating enough lift to fly at lower speeds. Above 40mph there is plenty of speed to fly and increasing your release speed by about 1mph will increase the maximum distance by about 10ft. This is the simplistic answer. You want to throw farther? Throw it faster. 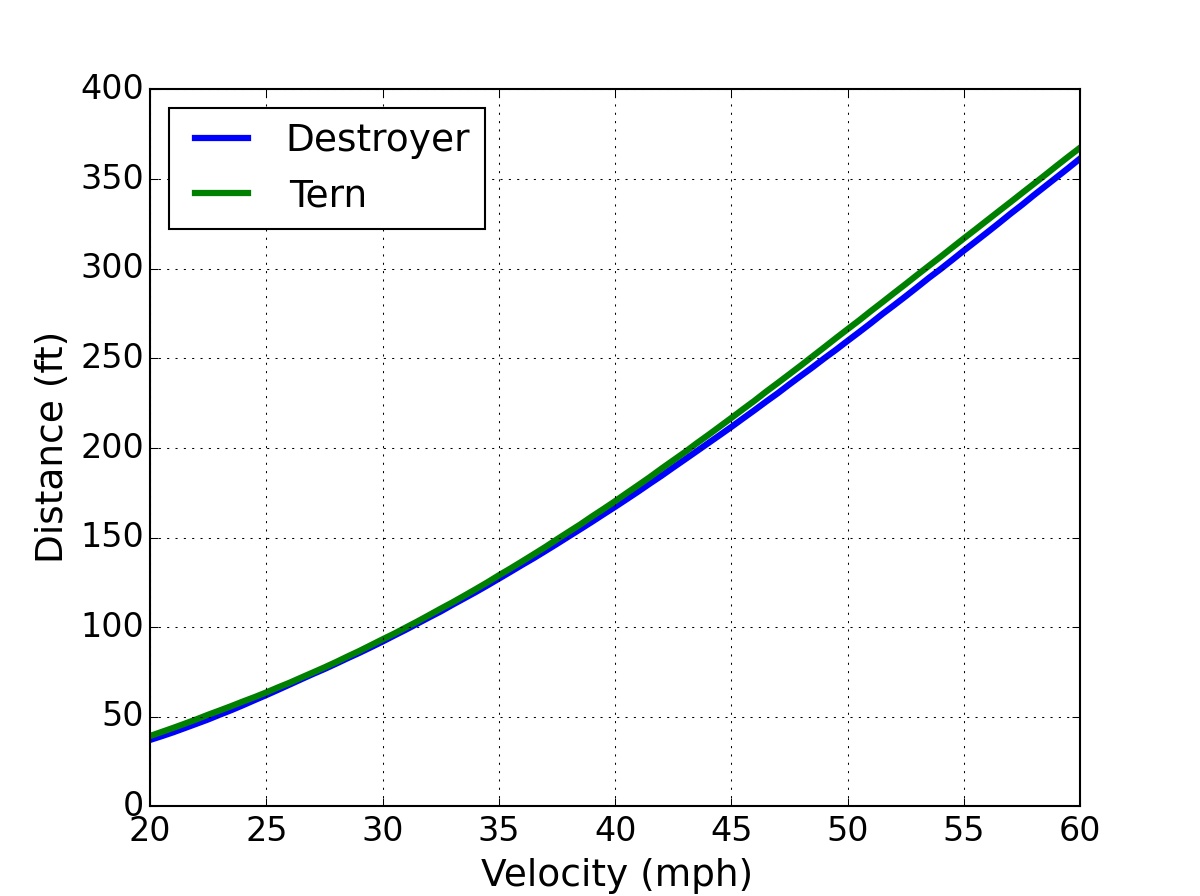 Well duh. Throwing a disc faster to get more distance seems like common sense. What other tips can we take from the data? Let's look at the angles of release. The max distance curves above were almost the same for two completely different drivers. How is that possible? Well, it turns out the distances were very similar, but the throws were not.


The figure below plots both the initial hyzer angle and the initial pitch angles. Looking at the hyzer angle, positive values represent anhyzers. Both discs get maximum distance at low speeds when thrown with significant anhyzer. These flex shots increase the flight time of the disc and thus the distance compared to a flat throw which would quickly fade to the left (RHBH). The story is different at high speeds. The Tern requires extreme hyzer angle at high speeds to get maximum distance due to the understability of the disc. These hyzer flip shots increase the flight time of the Tern compared to a flat throw which would quick turn right and burn into the ground. The stability of the Destroyer shows up as it continues to be thrown on a flex line to get maximum distance event up to 60mph. 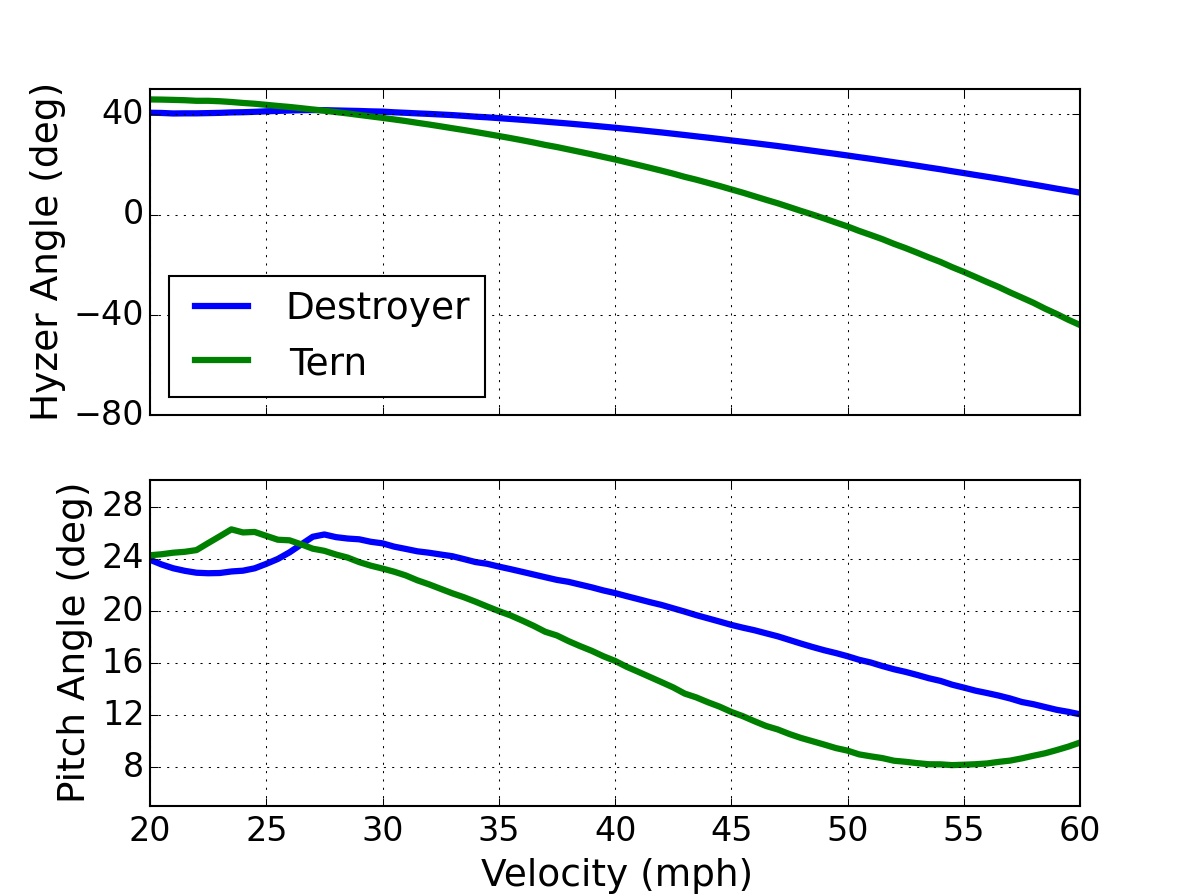 To better visualize the shapes of throws that produce maximum distance drives, check out the graphic below. Two speeds are shown for the two discs. The low speed throws look like quite similar flex lines curving right with a slight fade at the end. The high speed shots really show the difference between the stabilities of the discs. The Tern is thrown on a hyzer flip line and begins moving to the left, then moves right, before finishing back left. The Destroyer is still throw with anhyzer and moves significantly right before fading left.


These plots show that if you're throwing a disc for maximum distance, you'll need to generally throw the disc on a higher line. To compensate for the higher line, the hyzer release angle needs to be correct to get a full flight where the disc moves right before fading slightly at the end. The stability of the disc becomes an important factor for the max distance release angles only at higher speeds.

Throwing far is fun, but what if you're trying to drop your scores? Is it worth it to go for the green using a max distance line or to layup and take a par? It depends on how consistent you are.


The first take-away is that the Destroyer has less variability. This is in-line with the conventional wisdom that more stable discs are more consistent. These results also show that the maximum distance shots have significant variability. A release angle missed by a degree can lead to the disc being about 100ft off target for a 350ft throw. 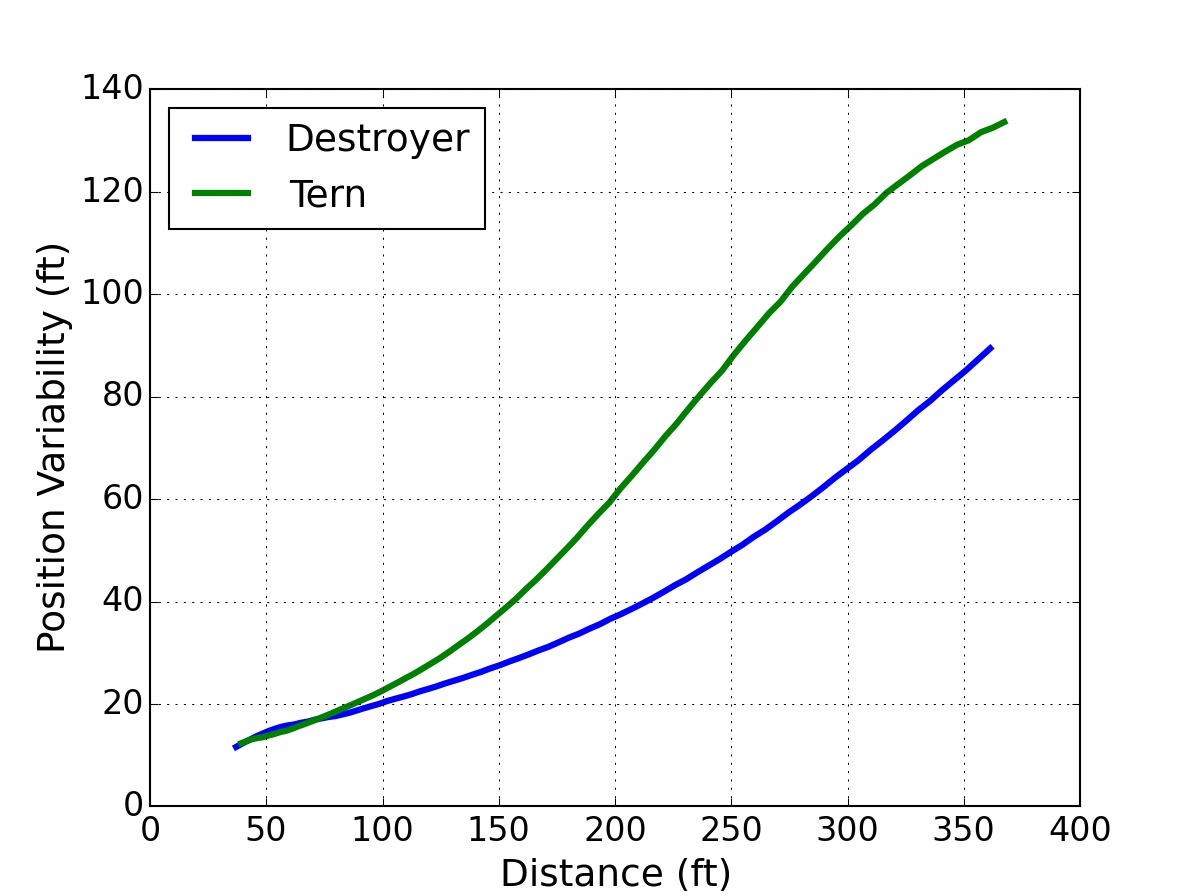 These results show that the easiest way to increase distance is to throw the disc faster. If you're all tapped out on speed, try taking higher lines with the appropriate hyzer angle to get a full S-curve out of the flight. These tips are great for maximum distance throws, but maximum distance doesn't always lead to your minimum score. Be smart about throwing these lines in competitive play as it will be difficult to stay on the fairway.

Pitch is the angle the disc makes with a horizontal plane. For a flat pitch angle, the disc is moving horizontal. A pitch angle of 45° would be throwing the disc up high into the air with the nose of the disc higher than the tail.